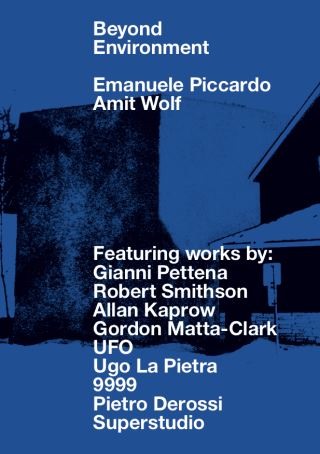 Beyond Environment presents the potent interchange between architecture, Land Art, and Performance Art that emerged through Italian architect Gianni Pettena's idealized collaboration with American artists Allan Kaprow and Robert Smithson in the 1970s. Captivated by a journey to the USA in 1971, Pettena would converse with the American Midwest, a conversation culminating in his meeting with Robert Smithson in Salt Lake City. Earlier in Minneapolis, Minnesota, Pettena's experiments in material trans- formations helped create some of the architect's most iconic works. Staged in an abandoned school and in a non-descriptive suburban house, and titled Ice House I and II, Pettena would pour water into the mold works he created around the buildings' perimeter walls. Curing during the winter night to a coat of ice, the houses resonated with their conceptual predecessor,

Kaprow's Fluids of 1967, as well as with an incomparable contemporary architectural sensibly concerned with the effects of variedly compounded, highly eidetic archi- tectural surfaces.

Emanuele Piccardo is an architect and a curator working from Genoa, Italy; Amit Wolf is an architect, curator, and Lecturer at Southern California Institute of Architecture, Los Angeles.