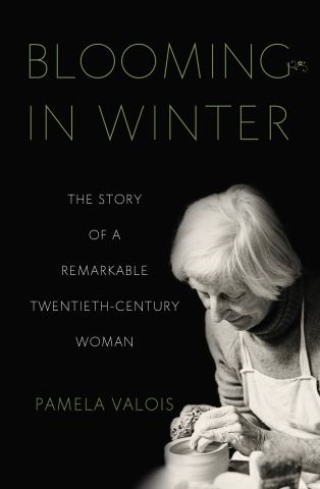 The Story of a Remarkable Twentieth-Century Woman

When Pam Valois met her in the 1970s, Jacomena (Jackie) Maybeck was a model of zestful, hands-on living and aging, still tarring roofs and splitting logs in her seventies, and Pam was a young working mother trying to carve out time for creative projects. Jackie became her mentor, and their friendship led to a best-selling book, Gifts of Age, that features portraits of Jackie and other exemplary women in the winter of their lives.
Decades later, when Pam and her husband bought Jackie’s home, she realized that she knew little about her mentor’s fascinating life. What had shaped and supported Jackie in living “at full tilt” until her death at ninety-five? Blooming in Winter tells this tale—a story that stretches from Java to a magical house designed by Jackie’s famous father-in-law, Bernard Maybeck, chronicling her early years as an immigrant and ranch girl and later as a bohemian, mother of twins, ceramicist, and widow, and, ultimately, the steward of the Maybeck legacy. Along the way, Jackie became an old woman who lived with grace and aplomb. Her uncommon approach to life encourages us to reflect on our own lives and what it looks like to live exuberantly to the very end.

Pamela Valois: After growing up in Sierra Madre, CA, Pam Valois moved north to attend UC Berkeley during the Free Speech Movement. After almost flunking out due to political rallies and other interests—birth control pills had just been offered—she returned to Los Angeles to become a dental hygienist and, in her free time, a quasi-hippie, selling macramé and her photos at weekend craft fairs. Pam married psychologist Lloyd Linford on the lawn of Jacomena Maybeck’s Berkeley cottage and studied photography with Ruth Bernhard in San Francisco. Gifts of Age: Portraits and Essays of 32 Remarkable Women, a bestseller inspired by Jacomena, was published in 1985. After immensely enjoying mothering two sons, Pam earned a master’s degree and started a new career in health care. Now at age seventy-five, she’s been retired for ten years. She enjoys walking in the woods, reading, and hanging out with friends and family.