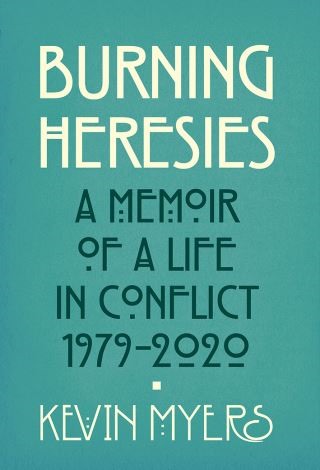 In this remarkable sequel to his critically acclaimed memoir Watching the Door, Irish journalist Kevin Myers reflects on his roller-coaster career over three decades in the Irish media, from the European conflicts he reported from to the personal conflicts he fought. In Burning Heresie, Ireland’s most controversial journalist tells his side of the story.

Kevin Myers: Journalist, broadcaster and novelist Kevin Myers wrote for The Irish Times, The Spectator, Sunday Telegraph, Irish Independent and The Sunday Times in a career that spanned over thirty years. He reported from Africa, Central America, India and Japan, covered the wars in Lebanon and Bosnia, and was journalist of the year for his despatches from Beirut. His first memoir, Watching the Door: A Memoir, 1971–1978, was published in 2006. In 2017, he was sacked from the Irish edition of The Sunday Times for allegedly anti-Semitic observations.