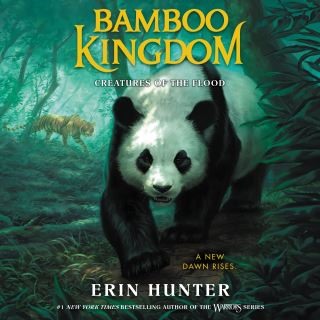 Bamboo Kingdom #1: Creatures of the Flood

One kingdom. Three worlds. An all-new series packed with high-stakes adventures from bestselling Warriors author Erin Hunter, perfect for fans of Wings of Fire and Endling.

The pandas of the Bamboo Kingdom have never forgotten the great flood that ended the peaceful life they’d always known. But for three young creatures born that day, the flood marks not an end, but a beginning—the beginning of their struggles to find a place in very different worlds.

Leaf, raised in the sparse Northern Forest, works tirelessly to help her family find bamboo to eat; Rain, hot-tempered, refuses to accept a suspicious new leader in her Southern Forest community; and Ghost, clumsy and uncoordinated, worries he’ll never fit in with his hunter family in the mountains.

None of them know that the others are out there, but thanks to a mysterious tiger that’s been threatening the Kingdom, they will soon find each other—and fulfill a prophecy that had been made long before they were born.

This first book of a thrilling new animal adventure series from Erin Hunter is sure to enthrall readers of her other bestselling series. Fans will love having a new universe to immerse themselves in!

Erin Hunter is inspired by a love of cats and a fascination with the ferocity of the natural world. In addition to having great respect for nature in all its forms, Erin enjoys creating rich mythical explanations for animal behavior. She is also the author of the Seekers, Survivors, Bravelands, and Bamboo Kingdom series.