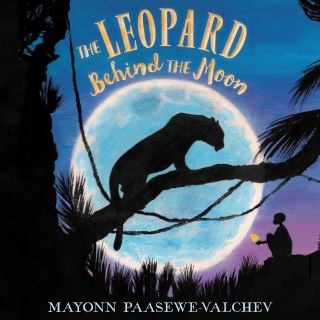 The Leopard Behind the Moon

No one knows what lies beyond the magical village door, but Ezomo is determined to find out. Mayonn Paasewe-Valchev’s debut is an unforgettable coming-of-age story about friendship, family, and long-standing traditions. The power of storytelling comes to life in this novel perfect for fans of Erin Entrada Kelly, Tracey Baptiste, and Tae Keller.

There are three important laws in Ezomo’s village: Do not go to The Valley, do not go out at night, and never, ever, ever open the magical door that protects them all. But when Ezomo encounters the leopard believed to have killed his father, he and his two best friends embark on a journey that leads them past the boundaries set by their elders.

With his friends by his side, Ezomo chases after the leopard, certain that it has the power to cure all. But in the process, he discovers the truth about his village. And that cautionary tales exist for a reason.

Mayonn Paasewe-Valchev was born in Liberia, where she was exposed to a culture of oral storytelling at a young age. She lived in the Netherlands for several years, where she learned to stuff her klompen (wooden shoes) with carrots and developed a love for reading stories—especially tales written by Roald Dahl and Astrid Lindgren. She lives in Georgia with her family.