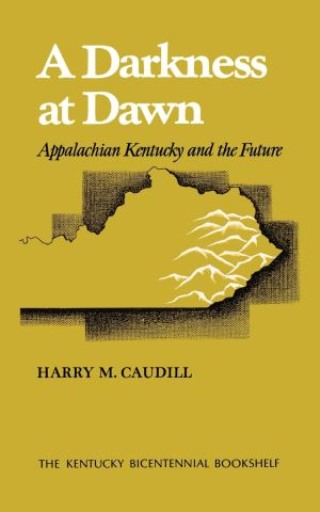 A Darkness at Dawn

Appalachian Kentucky and the Future

Outspoken Appalachian writer Harry M. Caudill analyzes the exploitation and decline of the eastern Kentucky mountain lands, which have rendered "no people in the nation...more forlorn than the Appalachian highlanders in our time." Frontier attitudes, a strong attachment to the land, and isolation have produced in Appalachia a backwoods culture which made its people susceptible to an outside exploitation of their resources that has perpetrated on them a passive society largely dependant on relief.

But the times, says Mr. Caudill, are changing. A growing world population and global industrialization have created a drastically altered situation in eastern Kentucky. The area's resources of energy are essential to the progress and well-being not only of the nation but also of the world; and the world is prepared to court the favor of the people who control these resources and is prepared to pay the price demanded by those owners. Mr. Caudill makes an eloquent plea for Kentuckians to reclaim the resources that lie in their mountains and to demand their fair share of the wealth generated by those resources. If they are willing to do this, the state and especially the people in eastern Kentucky can have a bright and prosperous future. But they can delay no longer. They must break the mold of passivity and take destiny into their own hands.

An attorney in Whitesburg, Kentucky, Harry M. Caudill is the author of such well-known books as Night Comes to the Cumberlands, Dark Hills to Westward, and My Land is Dying.

The Kentucky Bicentennial Bookshelf is a celebration of two centuries of the history and culture of the Commonwealth.

Harry M. Caudill: Harry M. Caudill (1922-1990) grew up in the coal fields of Letcher County, Kentucky, with a zest for history and reading. After being seriously wounded in Italy during World War II, Caudill went to the University of Kentucky Law School and later practiced law in Whitesburg, in Letcher County. He held some local political offices, in addition to a seat in the Kentucky House of Representatives. Caudill's 1963 book, Night Comes to the Cumberlands: A Biography of a Depressed Area was and is a very influential work on Eastern Kentucky, affecting local and national government through individuals ranging from President Kennedy to Kentucky governors and Appalachian writers such as Denise Giardina. After retiring from practicing law, Caudill wrote 6 more books, more than 80 articles, and many editorials in the local Whitesburg paper, The Mountain Eagle. He delivered frequent speeches on strip mining and other Eastern Kentucky issues.