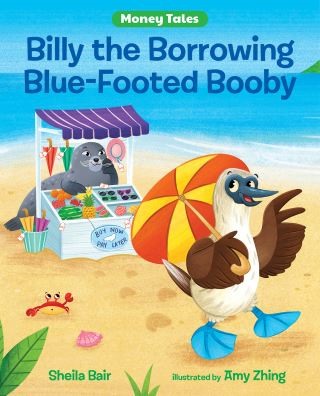 Billy the Blue-Footed Booby, who lived on the Galapagos, wanted to buy an umbrella, so he went to Selling Seal. But Billy didn't listen to Seal's explanation of what that umbrella would end up costing him. And then Billy wanted a fan like Arlene the tortoise's, a purple-striped wig like Ig the iguana's, neon-green shoes like Niels the lizard's, and Seal's anchovy grill. All his friends and his twin sister Bess tried to help, but Billy lost everything.

Sheila Bair has had a long and distinguished career in finance, academia, and government. She is perhaps best known as the Chair of the FDIC during the 2008-2009 financial crisis, when she was twice named by Forbes Magazine as the second most powerful woman in the world. A lifelong advocate for strong financial regulation and consumer protections, she is the author of the New York Times bestseller Bull by the Horns, her memoir of the financial crisis, and is a frequent op-ed contributor and TV commentator, as well as author of several children's books on financial matters.