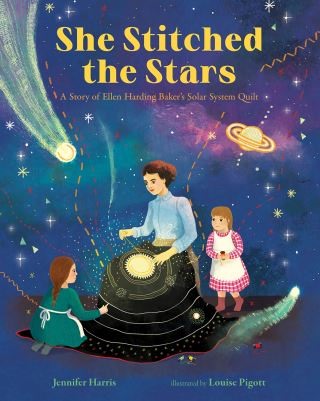 She Stitched the Stars

In 1876 Ellen Harding Baker began stitching an extraordinary quilt, one that accurately depicted our solar system. Ellen, a Iowa storekeeper's wife and a mother, had a curiosity that reached far beyond the stratosphere. Today the quilt hangs in the Smithsonian’s National Museum of American History. This lyrical story imagines the creation of the quilt from the perspective of Ellen’s daughters, who, like their mother, lived in a time when girls and women were expected to limit their pursuit of knowledge, and who may have been inspired to dream bigger and look farther.

Jennifer Harris is a professor of English at the University of Waterloo, Ontario, specializing in nineteenth-century American literature. This is her first book for children.