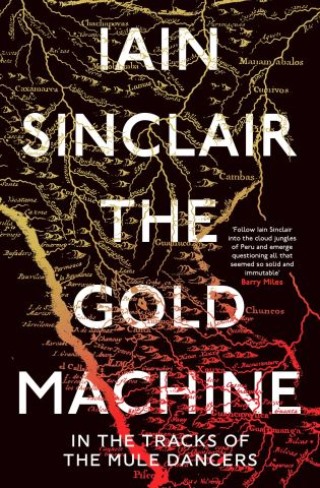 In the Tracks of the Mule Dancers

‘Follow Iain Sinclair into the cloud jungles of Peru and emerge questioning all that seemed so solid and immutable.’ Barry Miles

‘The Gold Machine is a trip, a psychoactive expedition in compelling company.’ TLS

From the award-winning author of The Last London and Lights Out for the Territory, a journey in the footsteps of our ancestors.

In The Gold Machine, Iain Sinclair and his daughter travel through Peru, guided by – and in reaction to – an ill-fated colonial expedition led by his great-grandfather, Arthur Sinclair. The incursions of Catholic bounty hunters and Adventist missionaries are contrasted with today’s ecotourists and short-cut vision seekers. The family history of a displaced Scottish highlander fades into the brutal reality of a major land grab. The historic thirst for gold and the establishment of sprawling coffee plantations leave terrible wounds on virgin territory.

What might once have been portrayed as an intrepid adventure is transformed into a shocking tale of the violated rights of indigenous people, secret dealings between London finance and Peruvian government, and the collusion of the church in colonial expansion. In Sinclair’s haunting prose, no place escapes its past, and nor can we.

Iain Sinclair: Iain Sinclair is the award-winning writer of numerous critically acclaimed books on London, including The Last London, Lights Out for the Territory, London Orbital and London Overground. He won the Encore Award and the James Tait Black Memorial Prize for his novel Downriver. He lives in Hackney, East London.