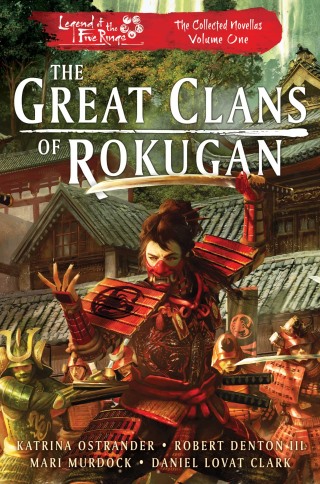 The Great Clans of Rokugan

Legend of the Five Rings: The Collected Novellas, Vol. 1

Warring samurai clans fight with swords and magic for the Emperor’s favor with these collected Legend of the Five Rings novellas, including a brand-new novella of the Crane Clan.

Ice and Snow by Katrina Ostrander – a surprise attack and courtly machinations challenge the untested heir to the Crane Clan to keep the peace and prove her value to her family.

The Sword and the Spirits by Robert Denton III – the champion of the Phoenix Clan must save her lost love from the darkness consuming him, and from the menace of a desecrated shrine.

Whispers of Shadow and Steel by Mari Murdock – in the Scorpion City of Lies, the “only honest Scorpion” magistrate is caught between family and finding justice in a murder case.

Across the Burning Sands by Daniel Lovat Clark – the future heir to the mighty Unicorn Clan faces duplicity, assassins, betrayal, and even sorcery as he seeks peace with the caliph of al-Zawira.

Katrina Ostrander: KATRINA OSTRANDER has served as editor for media tie-in novellas spanning multiple genres including cyberpunk, fantasy, Lovecraftian horror, and science fiction. As the Creative Director of Story and Setting for Fantasy Flight Games, she oversees the internal and licensed development of proprietary IPs, including Arkham Horror and Legend of the Five Rings. She has also written for or developed over a dozen roleplaying game products, including adventures, supplements, and core rulebooks.|||ROBERT DENTON III lives in the New River Valley of Virginia with his wife and three spoiled cats. He’s written extensively for the Legend of the Five Rings setting, including dozens of short stories, contributions to the fourth and fifth editions of the Legend of the Five Rings Roleplaying Game, and his first novella, The Sword and the Spirits. As an author of tabletop roleplaying games, his works include Tiny Taverns: A Slice-Of-Life Fantasy Roleplaying Game and the underwater fantasy setting Destiny of Tides.|||MARI MURDOCK is a freelance writer living in Utah. She has been writing for the tabletop gaming industry since 2013 with writing credits from companies such as Alderac Entertainment Group, Green Ronin Publishing, Gallant Knight Games, and Fantasy Flight Games, where she is best known for her work on Legend of the Five Rings. Though she has written many different genres, she loves projects that let her take inspiration from her Japanese roots. When not writing or gaming, Mari is most likely doodling monsters, cooking Asian fusion, or reading pulp fiction. She currently lives in Salt Lake City with her husband.|||DANIEL LOVAT CLARK is an author and game designer in the Twin Cities, Minnesota. He lives with a daughter, a dog, two cats, and a wife who may technically qualify as a third cat. Dan has a degree from the Barrett Honors College at Arizona State University, and learned most of what he actually knows working at Fantasy Flight Games in Roseville, Minnesota.