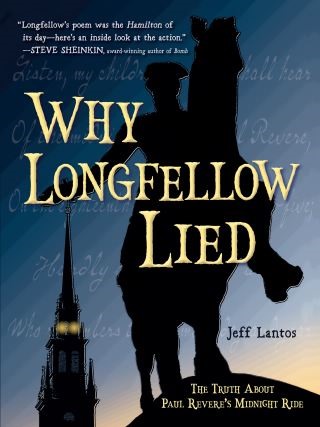 Paul Revere's daring midnight ride made him an instant celebrity, right? Wrong! At first, no one in Boston even wanted to mention it. Jeff Lantos pulls apart Longfellow's famous poem "Paul Revere's Ride" to unravel how and why he twisted historical facts.

Do you know how historically inaccurate "Paul Revere's Ride" is? And do you know why? Author Jeff Lantos pulls apart Longfellow's poem, tells the real story about Paul Revere's historic ride, and sets the record right. Not only that, he lays out when and why Longfellow wrote his poem and explains how without it, many of us wouldn't know much about Revere at all. This is Steve Sheinkin for the younger set, complete with an American mystery and a look at two important moments in the history of our country.

Jeff Lantos: Jeff Lantos is a fifth-grade teacher in Pacific Palisades, California, where he often writes history-based musicals for his students to perform. A UCLA study showed that his students' retention of history is higher than their peers. He was nominated for a 2015 Excellence in Theatre Education Award from the Tony Awards and Carnegie Mellon University. He holds a degree from Brown University and has worked producing musicals on Broadway. Why Longfellow Lied is his first book.