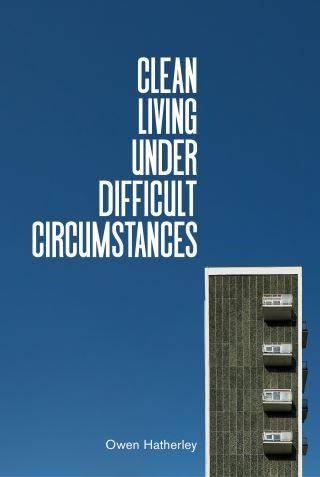 Finding a Home in the Ruins of Modernism

How to make a fairer, more just city

From the grandiose histories of monumental state building projects to the minutiae of street signs and corner cafés, from the rebuilding of capital cities to the provision of the humble public toilet, Clean Living under Difficult Circumstances argues for the city as a socialist project.

This essay collection spans a period from immediately before the 2008 financial crash to the year of the pandemic. Against the business-as-usual responses to both crises, Owen Hatherley outlines a vision of the city as both a venue for political debate and dispute as well as a space of everyday experience, one that we shape as much as it shapes us.

Incorporated here are the genres of memoir, history, music and film criticism, as well as portraits of figures who have inspired new ways of looking at cities, such as the architect Zaha Hadid, the activist and urbanist Jane Jacobs, and thinkers such as Mark Fisher and Adam Curtis. Throughout these pieces, Hatherley argues that the only way out of our difficult circumstances is to imagine and try to construct a better modernity.

Owen Hatherley: Owen Hatherley writes regularly on architecture and cultural politics for Architects Journal,The Guardian, The London Review of Books and New Humanist, and is the author of several books: Militant Modernism (Zero, 2009), A Guide to the New Ruins of Great Britain (Verso, 2010), Uncommon: An Essay on Pulp (Zero, 2011), A New Kind of Bleak: Journeys through Urban Britain (Verso 2012), The Ministry of Nostalgia (Verso, 2015) and Landscapes of Communism (Penguin 2015), Trans-Europe Express (Penguin, 2018). He Lives in London