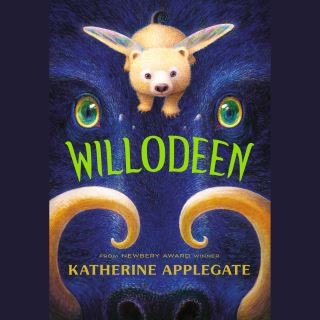 From #1 New York Times bestseller Katherine Applegate, a singular middle-grade novel about a girl who risks everything to help her handmade bear when he comes to life.

The earth is old and we are not, and that is all you must remember . . .

Eleven-year-old Willodeen adores creatures of all kinds, but her favorites are the most unlovable beasts in the land: strange beasts known as “screechers.” The villagers of Perchance call them pests, even monsters, but Willodeen believes the animals serve a vital role in the complicated web of nature.

Lately, though, nature has seemed angry indeed. Perchance has been cursed with fires and mudslides, droughts and fevers, and even the annual migration of hummingbears, a source of local pride and income, has dwindled. For as long as anyone can remember, the tiny animals have overwintered in shimmering bubble nests perched atop blue willow trees, drawing tourists from far and wide. This year, however, not a single hummingbear has returned to Perchance, and no one knows why.

When a handmade birthday gift brings unexpected magic to Willodeen and her new friend, Connor, she’s determined to speak up for the animals she loves, and perhaps even uncover the answer to the mystery of the missing hummingbears.

A timely and timeless tale about our fragile earth, and one girl’s fierce determination to make a difference.

Katherine Applegate: Katherine Applegate is the author of the bestselling Animorphs series and the novels Home of the Brave, available on audio from Listening Library, and The One and Only Ivan, winner of the 2013 Newbery Medal. She lives with her husband, author Michael Grant, and their two children in Northern California.

Ariadne Meyers starred as “Emma McArdle” on the groundbreaking television series Kate & Allie. Her other television credits include The Secret and Not Our Son. In addition, she has appeared on film in Author! Author!, Dutch, and How to Make an American Quilt. Ms. Meyers narrated The Cookbook Collector by Allegra Goodman for BOT and has recorded numerous titles for Listening Library, including the Trixie Beldon series by Julie Campbell.