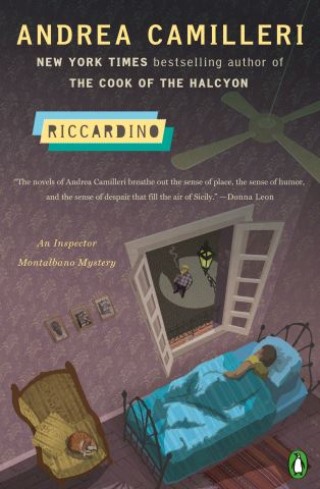 "At eighty, I foresaw Montalbano's departure from the scene, I got the idea and I didn't let it slip away. So I found myself writing this novel which is the final chapter; the last book in the series. And I sent it to my publisher saying to keep it in a drawer and to publish it only when I am gone." –Andrea Camilleri

Montalbano receives an early-morning phone call, but this time it's not Catarella announcing a murder, but a man called Riccardino who's dialed a wrong number and asks him when he'll be arriving at the meeting. Montalbano, in irritation, says: "In ten minutes." Shortly after, he gets another call, this one announcing the customary murder. A man has been shot and killed outside a bar in front of his three friends. It turns out to be the same man who called him.

Thus begins an intricate investigation further complicated by phone calls from "the Author" in tour de force of metafiction and Montalbano’s last case.

Andrea Camilleri: Andrea Camilleri, a mega-bestseller in Italy and Germany, is the author of the New York Times bestselling Inspector Montalbano mystery series as well as historical novels that take place in nineteenth-century Sicily. His books have been made into Italian TV shows and translated into thirty-two languages. His thirteenth Montalbano novel, The Potter's Field, won the Crime Writers' Association International Dagger Award and was longlisted for the IMPAC Dublin Literary Award. He died in 2019.

Stephen Sartarelli is an award-winning translator and the author of three books of poetry.