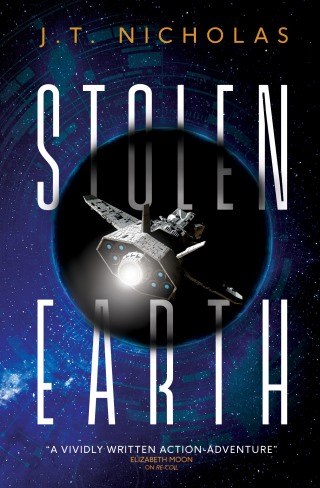 Firefly meets The Expanse in a future where humanity has destroyed the Earth through ecological disaster and warfare, and a totalitarian state prevents any access to their home...

Environmental disasters and AI armies have caused the human population of Earth to flee. They lie scattered across space stations and colonies, overcrowded and suffering. The Earth is cut off by the Interdiction Zone: a network of satellites that prevents any escape from the planet. The incredible cost of maintaining it has crippled humanity, who struggle under the totalitarian yoke of the Sol Commonwealth government. Many have been driven to the edge of society, taking any work offered, criminal and otherwise, in order to survive. The crew of the Arcus are just such people.

Through the Interdiction Zone, a world of priceless artifacts awaits, provided anyone is crazy enough to make the run. With fuel running low and cred accounts even lower, the Arcus’ survival might depend on taking the job. Yet on arrival on Earth, the crew discovers that what remains of their world is not as they have been told, and the truth may bring the entire Sol Commonwealth tumbling down…

J.T. Nicholas: J.T. Nicholas is the author of the upcoming science-fiction novel Re-Coil and the neo-noir science-fiction series The New Lyons Sequence. When not writing, J.T. spends his time practising a variety of martial arts, playing games (video, tabletop, and otherwise), and reading everything he can get his hands on. He currently resides in Wilmington, North Carolina with his wife.