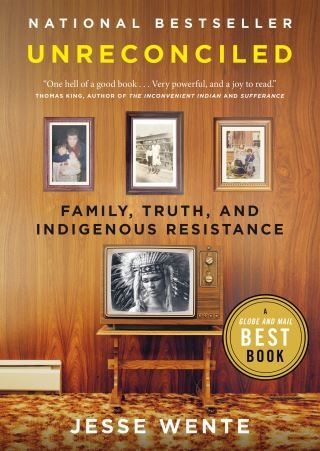 "Unreconciled is one hell of a good book. Jesse Wente’s narrative moves effortlessly from the personal to the historical to the contemporary. Very powerful, and a joy to read."
—Thomas King, author of The Inconvenient Indian and Sufferance

A prominent Indigenous voice uncovers the lies and myths that affect relations between white and Indigenous peoples and the power of narrative to emphasize truth over comfort.

Part memoir and part manifesto, Unreconciled is a stirring call to arms to put truth over the flawed concept of reconciliation, and to build a new, respectful relationship between the nation of Canada and Indigenous peoples.
Jesse Wente remembers the exact moment he realized that he was a certain kind of Indian--a stereotypical cartoon Indian. He was playing softball as a child when the opposing team began to war-whoop when he was at bat. It was just one of many incidents that formed Wente's understanding of what it means to be a modern Indigenous person in a society still overwhelmingly colonial in its attitudes and institutions.

As the child of an American father and an Anishinaabe mother, Wente grew up in Toronto with frequent visits to the reserve where his maternal relations lived. By exploring his family's history, including his grandmother's experience in residential school, and citing his own frequent incidents of racial profiling by police who'd stop him on the streets, Wente unpacks the discrepancies between his personal identity and how non-Indigenous people view him.
Wente analyzes and gives voice to the differences between Hollywood portrayals of Indigenous peoples and lived culture. Through the lens of art, pop culture, and personal stories, and with disarming humour, he links his love of baseball and movies to such issues as cultural appropriation, Indigenous representation and identity, and Indigenous narrative sovereignty. Indeed, he argues that storytelling in all its forms is one of Indigenous peoples' best weapons in the fight to reclaim their rightful place.

Wente explores and exposes the lies that Canada tells itself, unravels "the two founding nations" myth, and insists that the notion of "reconciliation" is not a realistic path forward. Peace between First Nations and the state of Canada  can't be recovered through reconciliation--because no such relationship ever existed.

Jesse Wente: JESSE WENTE is an Anishinaabe writer, broadcaster, and arts leader. Born and raised in Toronto, his family comes from Chicago and Genaabaajing Anishinaabek and he is a member of the Serpent River First Nation. Best known for more than two decades spent as a columnist for CBC Radio’s Metro Morning, he also worked at the Toronto International Film Festival for eleven years. In February 2018 he was named the first Executive Director of the Indigenous Screen Office. Wente was appointed Chair of the Canada Council for the Arts in 2020, the only First Nations person to ever hold the position.