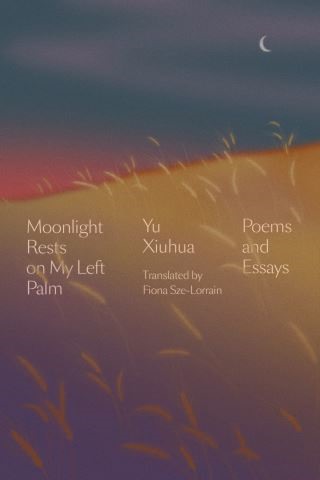 Moonlight Rests on My Left Palm

Starting with the viral poem “Crossing Half of China to Fuck You,” Yu Xiuhua’s raw collection in Fiona Sze-Lorrain's translation chronicles her life as a disabled, divorced, single mother in rural China.

Yu Xiuhua was born with cerebral palsy in Hengdian village in the Hubei Province, in central China. Unable to attend college, travel, or work the land with her parents, Yu remained home where she could help with housework. Eventually she was forced into an arranged marriage that became abusive. She divorced her husband and moved back in with her parents, taking her son with her.

In defiance of the stigma attached to her disability, her status as a divorced single mother, and as a peasant in rural China, Yu found her voice in poetry. Starting in the late 90’s, her writing became a vehicle with which to explore and share her reflections on homesickness, family and ancestry, the reality of disability in the context of a body’s urges and desires.

Then, Yu's poem “Crossing Half of China to Fuck You” blew open the doors on the patriarchal and traditionalist world of contemporary Chinese poetry. She became an internet sensation, finding a devoted following among young readers who enthusiastically welcomed her fresh, bold, confessional voice into the literary canon.

Thematically organized, Yu’s essays and poems are in conversation with each other around subjects that include love, nostalgia, mortality, the natural world and writing itself.

Yu Xiuhua: Born in 1976 in Hengdian, Hubei Province, China, Yu Xiuhua is a poet from an impoverished rural background who was born with cerebral palsy. Yu began writing poetry in 1998. In 2014, her poem "Crossing Half of China to Fuck You" became an online sensation, launching her career as a celebrity poet and writer. Her poetry collection Moonlight Rests on My Left Palm (Guangxi Normal University Press, 2015) sold over 300,000 copies, a record for Chinese poetry titles of the past three decades. Yu received the Peasant Literature Award in 2016. Still Tomorrow, an award-winning documentary film about her life and poetry, was released to critical acclaim the same year. She was also the recipient of the Hubei Literary Prize in 2018.