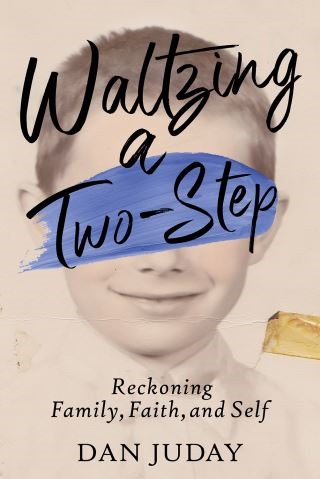 Reckoning Family, Faith, And Self

&nbsp;&nbsp;&nbsp;&nbsp;&nbsp;&nbsp;&nbsp;&nbsp;&nbsp; Waltzing a Two-Step&nbsp;is the first-person account of a boy born into the rural Midwest in the middle of the 20th Century. A bright, timid boy, he is enthralled with the grandeur of his local library and his Catholic church. One of five children in an upwardly mobile family, he struggles with being gay.&nbsp;Contemplating the paradoxes that life presents him, he looks for his proper place in an enticing but unwelcoming world, a search that takes him overseas–chasing lost happiness and struggling to fit in.&nbsp;His search ultimately reveals that he has been looking for himself all along. It is a cautionary tale told late in life out of the comfort and regret that come with memory and the bittersweetness of time and opportunity gone by without addressing things that should have been said earlier. The story has many parallels to the world in the 21st Century and is a must-read for those searching for life's answers.

Dan Juday: Dan Juday is a former film producer, publishing director, and communications consultant now retired and living in North Leitrim, Ireland. His professional work took him to public health reporting in Guatemala, Brazil, and Colombia, consultation work in Milan, London, Vatican City, Singapore, Manila, and Tokyo, and film production in Lebanon, Belgium, Mexico, and Italy. Publishing ventures, film premieres, and speaking opportunities saw him traveling the US extensively. It was his time away from his career, most often spent in a small bungalow in the hills of North Leitrim, Ireland, where he came to discover his own voice, to begin to see his own story. On a sabbatical there he decided to pursue something he always wanted to try—poetry. His first poems spoke with clarity this quietude brought him. Living amidst the daily comings and goings of his rural neighbors in Leitrim—farmers shearing their sheep and standing out in dark fields to be with calving cows—gave him the opportunity to see the profound truth held in simple moments. The faithful in his local parish exposed him to the eternal mystery and rote gesture of daily and weekly devotion. Nature herself spoke to him. "Be still. Listen. Ask yourself why." It was in the solitude of those Leitrim hills where he learned to speak about how he saw the world. After his professional retirement, he learned to bring that voice to his own story, ultimately leading to his memoir Waltzing a Two-Step.