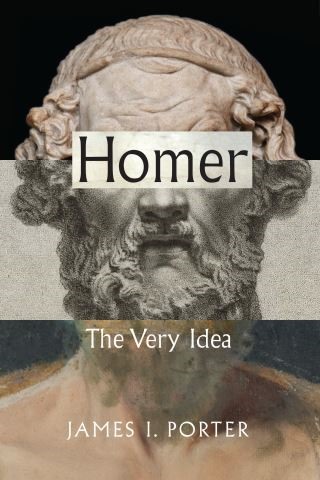 The story of our ongoing fascination with Homer, the man and the myth.

Homer, the great poet of the Iliad and the Odyssey, is revered as a cultural icon of antiquity and a figure of lasting influence. But his identity is shrouded in questions about who he was, when he lived, and whether he was an actual person, a myth, or merely a shared idea. Rather than attempting to solve the mystery of this character, James I. Porter explores the sources of Homer’s mystique and their impact since the first recorded mentions of Homer in ancient Greece.

Homer: The Very Idea considers Homer not as a man, but as a cultural invention nearly as distinctive and important as the poems attributed to him, following the cultural history of an idea and of the obsession that is reborn every time Homer is imagined. Offering novel readings of texts and objects, the book follows the very idea of Homer from his earliest mentions to his most recent imaginings in literature, criticism, philosophy, visual art, and classical archaeology.

James I. Porter: James I. Porter is the Irving Stone Professor of Literature at the University of California, Berkeley. He is the author of numerous books, including Nietzsche and the Philology of the Future, The Invention of Dionysus: An Essay on ‘The Birth of Tragedy’, and The Sublime in Antiquity. He has also edited several books and is a coauthor of Postclassicisms, also published by the University of Chicago Press.