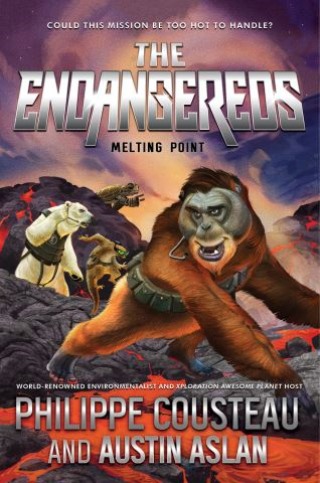 It’s time for animals to take fate into their own paws! The Endangereds: The Melting Point is the second book in a thrilling new adventure series by world-renowned environmentalist and Emmy-nominated host of Xploration Awesome Planet Philippe Cousteau and award-winning TURBO Racers author Austin Aslan.

Around the world, temperatures are rising, ice caps are melting, and innocent animals are in trouble. Humans had their chance to fix it and failed. It’s time for the animals to take their fate into their own paws. It’s time for . . . the Endangereds.

When word reaches the Endangereds that one of the last of a species of nearly extinct sloths is in trouble, the team don’t hesitate to strap on their gear, fire up their helicopter, and rush off into action. But this time their mission is complicated by the appearance an unexpected foe—an animal faction bent on saving the world by making humans extinct. It’s the toughest assignment the Endangereds have faced yet as the faction will stop at nothing to take back the world, one biome at a time.

It’s a rollicking new high-stakes turn in the thrilling environmental-adventure series by Philippe Cousteau, the world-renowned environmentalist and Emmy-nominated host of Awesome Planet, and Austin Aslan, the award-winning author of the TURBO Racers book series.

Austin Aslan is the author of the TURBO Racers and the Islands at the End of the World books. Austin has a master’s in conservation biology and was an ecotourism Peace Corps volunteer in a Honduran cloud forest. He resides in northern Arizona with his ecologist wife and two children and was recently elected to the Flagstaff City Council.