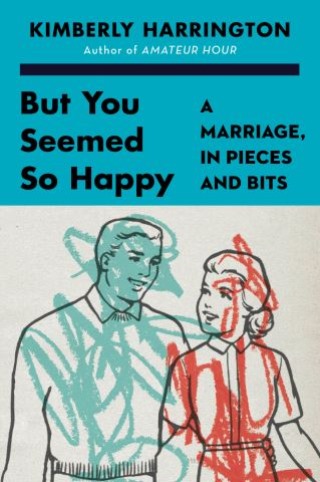 But You Seemed So Happy

A Marriage, in Pieces and Bits

In this tender, funny, and sharp companion to her acclaimed memoir-in-essays Amateur Hour, Kimberly Harrington explores and confronts marriage, divorce, and the ways love, loss, and longing shape a life.

Six weeks after Kimberly and her husband announced their divorce, she began work on a book that she thought would only be about divorce — heavy on the dark humor with a light coating of anger and annoyance. After all, on the heels of planning to dissolve a twenty-year marriage they had chosen to still live together in the same house with their kids. Throw in a global pandemic and her idea of what the end of a marriage should look and feel like was flipped even further on its head.

This originally dark and caustic exploration turned into a more empathetic exercise, as she worked to understand what this relationship meant and why marriage matters so much. Over the course of two years of what was supposed to be a temporary period of transition, she sifted through her past—how she formed her ideas about relationships, sex, marriage, and divorce. And she dug back into the history of her marriage — how she and her future ex-husband had met, what it felt like to be madly in love, how they had changed over time, the impact having children had on their relationship, and what they still owed one another.

But You Seemed So Happy is a time capsule of sorts. It’s about getting older and repeatedly dying on the hill of being wiser, only to discover you were never all that dumb to begin with. It’s an honest, intimate biography of a marriage, from its heady, idealistic, and easy beginnings to it slowly coming apart and finally to its evolution into something completely unexpected. As she probes what it means when everyone assumes you’re happy as long as you’re still married, Harrington skewers engagement photos, Gen X singularity, small-town busybodies, and the casual way we make life-altering decisions when we’re young. Ultimately, this moving and funny memoir in essays is a vulnerable and irreverent act of forgiveness—of ourselves, our partners, and the relationships that have run their course but will always hold profound and permanent meaning in our lives.

Kimberly Harrington is the author of Amateur Hour: Motherhood in Essays and Swear Words and But You Seemed So Happy: A Marriage, In Pieces and Bits. Her work is included in the collections Merciless & Unpredictable: A McSweeney's Guide to Parenting and Keep Scrolling Till You Feel Something: Twenty-One Years of Humor From McSweeney’s Internet Tendency. She’s a columnist and regular contributor to McSweeney’s and her work has also appeared in The New Yorker, the New York Times, and The Cut. A long-time copywriter and creative director for design studios and brands, her clients have included Apple, Nike, and Netflix.