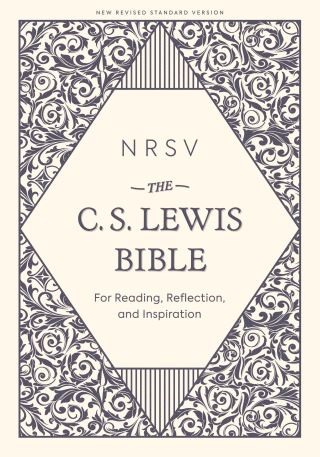 For Reading, Reflection, and Inspiration

Read and Reflect on Scripture alongside C. S. Lewis

C. S. Lewis was one of the intellectual giants of the twentieth century and arguably one of the most thought-provoking and influential Christian writers of his day. Countless readers have found insight and inspiration from his uniquely articulate view of God’s interaction with the world. The NRSV C. S. Lewis Bible provides readings composed of selections from Lewis’s celebrated spiritual classics, a collection that includes Mere Christianity, The Screwtape Letters, The Great Divorce, The Problem of Pain, Miracles, A Grief Observed, The Weight of Glory, and The Abolition of Man, as well as letters, poetry, fiction, and Lewis’s less-familiar works.

Each reading in this NRSV Bible, paired alongside relevant passages in the Bible, offers C. S. Lewis as a companion to your daily meditation of Scripture. As you engage in your devotional Bible reading, you will also gain insight from Lewis’s writings and spiritual journey as you invite him into your spiritual discipline.

Set in Zondervan’s exclusive NRSV Comfort Print® typeface, this New Revised Standard Version Bible offers a smooth reading experience that complements the foremost Bible translation vetted by Protestant, Catholic, Orthodox, Evangelical, and Jewish scholars. Renowned for its beautiful balance of scholarship and readability, the NRSV faithfully serves the church in personal spiritual formation, in the liturgy, and in the academy.

Clive Staples Lewis was born in 1898. Known as "Jack" by his friends, Lewis and his good friend J.R.R. Tolkien, the author of The Lord of the Rings trilogy, were part of a writer's club, The Inklings, who would meet at the local pub to discuss story ideas. Lewis's fascination with fairytales, myths, and ancient legends coupled with inspiration drawn from his childhood led him to write The Lion, the Witch and the Wardrobe, one of the best-loved books of all time. Six further books in the immensely popular Chronicles of Narnia followed, and the final title, The Last Battle, received the Carnegie Award, one of the highest marks of excellence in children's literature.