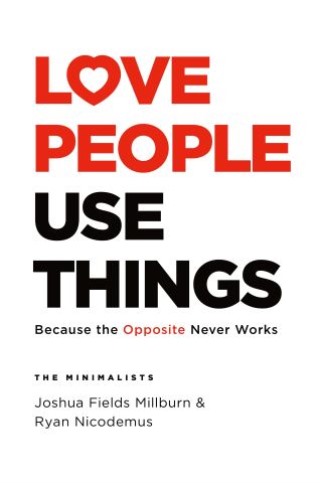 Because the Opposite Never Works

"The Minimalists show you how to disconnect from our conditioned material state and reconnect to our true essence: love people and use things. This is not a book about how to live with less, but about how to live more deeply and more fully."
—Jay Shetty, #1 New York Times bestselling author of Think Like a Monk

AS SEEN ON THE NETFLIX DOCUMENTARIES MINIMALISM & LESS IS NOW

Imagine a life with less: less stuff, less clutter, less stress and debt and discontent—a life with fewer distractions. Now, imagine a life with more: more time, more meaningful relationships, more growth and contribution and contentment—a life of passion, unencumbered by the trappings of the chaotic world around you. What you’re imagining is an intentional life. And to get there, you’ll have to let go of some clutter that’s in the way.

In Love People, Use Things, Joshua Fields Millburn and Ryan Nicodemus move past simple decluttering to show how minimalism makes room to reevaluate and heal the seven essential relationships in our lives: stuff, truth, self, money, values, creativity, and people. They use their own experiences—and those of the people they have met along the minimalist journey—to provide a template for how to live a fuller, more meaningful life.

Because once you have less, you can make room for the right kind of more.

Joshua Fields Millburn: Joshua Fields Millburn is a bestselling author, writing instructor, and international speaker. He is best known as one half of TheMinimalists.com, where he and Ryan Nicodemus write about living a meaningful life with less stuff. His books include Everything That Remains: A Memoir; Essential: Essays by The Minimalists; Minimalism: Live a Meaningful Life; and As a Decade Fades: A Novel. He has been featured in the New York Times, Wall Street Journal, USA Today, Time, Forbes, Boston Globe, San Francisco Chronicle, Chicago Tribune, Seattle Times, Toronto Star, Globe & Mail, Vancouver Sun, Village Voice, L.A. Weekly, and many other outlets.|||

Ryan Nicodemus, better known as one half of The Minimalists, writes about living a meaningful life for more than 2 million readers at TheMinimalists.com.

Born in 1981, Nicodemus lives in Missoula, Montana, by way of Dayton, Ohio.