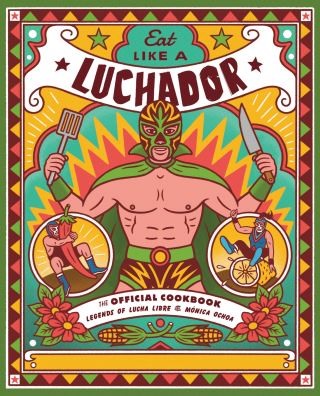 From the ring to the kitchen, celebrate lucha libre with popular Mexican dishes offering a modern twist from iconic athletes, legends, and superstars in this one-of-a-kind cookbook for wrestling fans and aspiring chefs alike.

Lucha libre—or, professional Mexican wrestling—is the most popular sport in Mexico after soccer and has become an international pop culture phenomenon all over the world. This officially licensed cookbook with the Legends of Lucha Libre includes more than 50 favorite Mexican dishes with a modern-day twist from the sport's most celebrated luchadores and luchadoras including Solar, Super Astro, Penta Zero M, Lady Maravilla, and more. Also included are fun stories and facts on championship details and family legacies, dozens of photos of wrestlers in the ring and in the kitchen, and illustrations of delicious food.

Written by Mexico's leading female lucha libre journalist, Mónica "Centellita" Ochoa has interviewed some of the most well-known wrestlers in lucha libre, costume designers, and restaurant owners from around the globe to compile this must-have collection of recipes fit for hungry luchadores and their families.