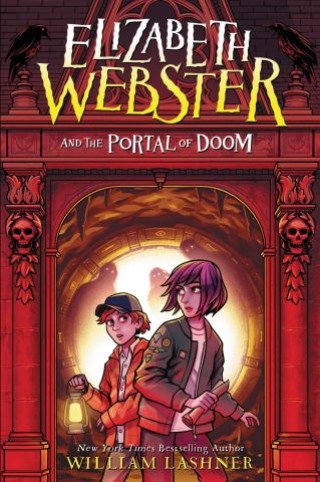 Elizabeth Webster and the Portal of Doom

In this spine-tingling sequel to Elizabeth Webster and the Court of Uncommon Pleas, young Elizabeth has a client and case of her very own, but things quickly become bloodstains-on-the-courtroom-floor messy.

After her grand success in the courtroom against the demon Redwing, Elizabeth thought life would get much easier. But balancing homework with defending the undead is tricky. And lately, it's been tough convincing her father that she's ready to do more than sweep the floors of the family firm.
When a wailing banshee mother begs for her help in saving her son, Elizabeth jumps at the case. Free the boy named Keir McGoogan, then reunite him with his mother at the Portal of Doom -- piece of cake.
But there's a catch. While Keir waits for his trial, Elizabeth must shepherd him through the horrifying halls of middle school! And soon she realizes that Keir's fate is tied to a terrifying pact made on a dark, stormy night a century ago. Behind his smart mouth and his 12-year-old appearance, Keir's hiding a secret big enough to sink your teeth into. Will Elizabeth and her friends be able to protect Keir? Or, are they the ones who need protecting?
Packed with thrills, chills, laughter, and a gremlin, this second adventure will have Elizabeth's fans hiding under their covers as they read through the night.

William Lashner: William Lashner is a former criminal prosecutor with the Department of Justice in Washington, D.C. and a graduate of the Iowa Writers' Workshop. His novels have been published worldwide and have been nominated for two Shamus Awards, a Gumshoe Award, an Edgar Award, and been selected as an Editor's Choice in the New York Times Book Review. When he was a kid, his favorite books were The Count of Monte Cristo and any comic with the Batman on the cover. Elizabeth Webster is his first series for kids.