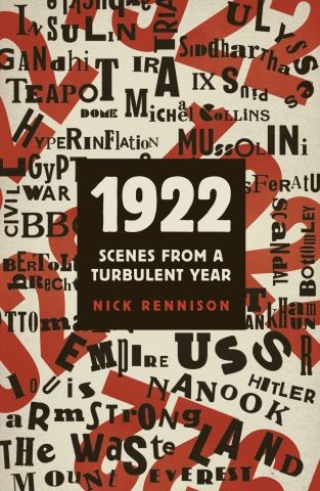 Scenes from a Turbulent Year

1922 was a year of great turbulence and upheaval. Its events reverberated throughout the rest of the twentieth century and still affect us today, 100 years later.

Empires fell. The Ottoman Empire collapsed after more than six centuries. The British Empire had reached its greatest extent but its heyday was over. The Irish Free State was declared and demands for independence in India grew. New nations and new politics came into existence. The Soviet Union was officially created and Mussolini's Italy became the first Fascist state.

In the USA, Prohibition was at its height. The Hollywood film industry, although rocked by a series of scandals, continued to grow. A new mass medium - radio - was making its presence felt and, in Britain, the BBC was founded. In literature it was the year of peak modernism. Both T. S. Eliot's The Waste Land and James Joyce's Ulysses were first published in full.

In society, already changed by the trauma of war and pandemic, the morals of the past seemed increasingly outmoded; new ways of behaving were making their appearance. The Roaring Twenties had begun to roar and the Jazz Age had arrived.

1922 also saw the discovery of Tutankhamun's tomb, the arrest of Mahatma Gandhi, the death of Marcel Proust, the election of a new pope, the release of the first major vampire movie, and the brief imprisonment in Munich of an obscure right-wing demagogue named Adolf Hitler.

In a sequence of vividly written sketches, Nick Rennison conjures up all the drama and diversity of an extraordinary year.

Nick Rennison: NICK RENNISON is a writer, editor and bookseller with a particular interest in the Victorian era and in crime fiction. He is the editor of six anthologies of short stories for No Exit Press, plus A Short History of Polar Exploration, Peter Mark Roget: A Biography, Freud and Psychoanalysis, Robin Hood: Myth, History & Culture and Bohemian London, published by Oldcastle Books. He is a regular reviewer for both The Sunday Times and BBC History Magazine.