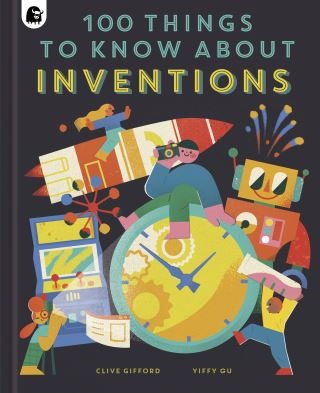 100 Things to Know About Inventions

How do you sum upthe world's amazing inventions in just 100 words? This striking book takes on the challenge! From helicopters to fireworks, each of the carefully chosen 100 words has its own 100-word long description and quirky illustration, providing a fascinating introduction to inspiring inventions from history to the modern day. Basically, everything you need to know in a nut shell.

Along with some expected inventions, such as trains and Internet, you'll also discover less predictable inventions that will give you a fresh perspective. With balloons and submarine, you can explore the risks some inventors had to take. Through paper and pencil imagine how such seemingly simple objects would have been groundbreaking at the time of invention; whereas some inventions, such as skates, had a very funny beginning! With a clean, contemporary design, each word occupies a page of its own. A large striking illustration neatly encapsulates the accompanying 100 words of text.

Clive Gifford: Clive Gifford has traveled to more than 70 countries, climbed rocket launch towers, ridden on robots, and flown gliders. He's had more than 200 books published and has received nominations for or won Royal Society, School Library Association, Smithsonian, and TES awards. He won the Blue Peter Book Award for Best Book with Facts 2019 for his title The Colors of History (QEB). Clive lives in Manchester, UK.