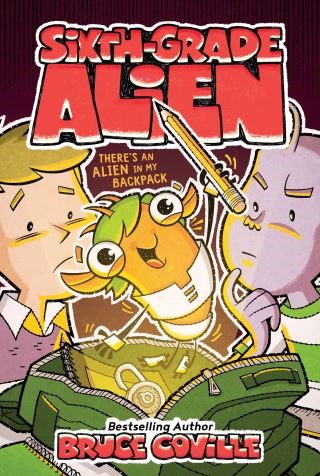 There's an Alien in My Backpack

Pleskit and Tim meet a new alien friend in this ninth book in the hilarious, fast-paced, and accessible sci-fi series Sixth-Grade Alien from the bestselling author of Aliens Ate My Homework, Bruce Coville.

Pleskit has always said that he’s not necessarily the first alien to go to school on Earth—just the first one to do it openly. Tim discovers the truth of those words when he meets a two-foot-tall alien, Beebo, who is stranded and desperately wants to get back to his own planet.

Unfortunately, Beebo’s presence on Earth could cause a diplomatic disaster. So Pleskit can’t ask his Fatherly One for help. And help is what the boys need, because Beebo can’t resist using his powers to cause chaos in the classroom and havoc at home.

Pleskit and Tim have faced plenty of alien menaces. But can they survive an incredibly cute prankster who has a genuine gift for causing the most embarrassing trouble ever?

Bruce Coville: Bruce Coville has published more than one hundred books, which have sold more than sixteen million copies. Among his most popular titles are My Teacher Is an Alien, Into the Land of the Unicorns, and The Monster’s Ring. Bruce also founded Full Cast Audio, a company that creates recordings of the best in children’s and young adult literature. He lives in Syracuse, New York, with his wife, Katherine. Visit him at BruceCoville.com.