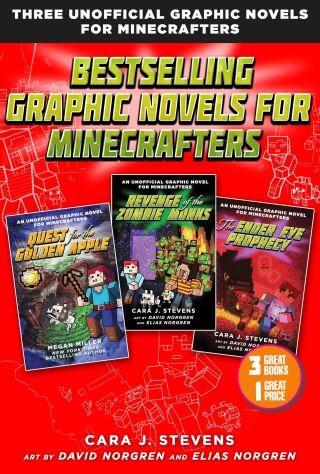 Includes Quest for the Golden Apple (Book 1), Revenge of the Zombie Monks (Book 2), and The Ender Eye Prophecy (Book 3)

For fans of Minecraft and graphic novels, an epic, full-color box set of three bestselling adventures.

Join the young hero Phoenix as she navigates the world of Minecraft. This compilation of bestselling graphic novels for Minecrafters includes the following titles:

The Quest for the Golden Apple (Book #1)

Phoenix longs to see the world outside of her village. One day, she risks a trip over the town’s wall to see the dark forest. Her quick adventure releases a monster that turns her brother into a zombie! It’s up to Phoenix to save him by leaving her village and finding the enchanted golden apple.

This graphic novel for kids is followed by other Minecraft graphic novels, including Revenge of the Zombie Monks, Saving Xenos, Chasing Herobrine, The Ender Eye Prophecy, and Battle for the Dragon’s Temple. They are easy graphic novels and are sure to be enjoyed by all who love Minecraft and stories filled with adventure, courage, and action.

Quest for the Golden Apple is especially ideal for those who aren’t inclined to read but love Minecraft. This graphic novel is a quick and engaging read for ages 9-12 with more than 750 pictures.

Revenge of the Zombie Monks (Book #2)

Phoenix, Wolfie, and their friends are back in this exciting second part of the Unofficial Graphic Novel for Minecrafters series! Past the walls of their monastery, the monks of Xenos grow enchanted golden apples for their neighbor villagers. As readers learn in Quest for the Golden Apple, these golden apples have magical healing abilities and have the power to keep the villagers save. The monks also have and protect the knowledge that connects Xenos to her sister worlds. This knowledge keeps Xenos and her citizens safe. But when the monks are zombified, Xenos’s citizens need a new hero.

Following the design of zombie comics and Minecraft comics, follow Phoenix and her friends as they fight to save the citizens and monks of Xenos. But Phoenix and her crew of heroes have no idea and do not suspect the culprit behind this disaster—an incredibly powerful foe who will do anything to keep Phoenix from saving her world.

Peace has finally been restored in Xenos, but Phoenix longs to return home to her family of miners. Sheltered by the monks who guard the border world, she spends her days searching for clues about her real identity.

Just when Phoenix is losing hope that she’ll ever discover the truth, two miner ambassadors arrive at the monastery, looking for a girl from their ancient legends who is said to wear an enchanted Ender eye necklace and is destined to save their village. Could that girl be Phoenix?

Determined to follow every clue that could set her free, Phoenix decides to join them on their quest to restore peace to their land. But along the way, zombie pirates attack, capturing Phoenix and taking her to the Nether. Now it’s up to Xander to convince the villagers and miners to put aside their differences and come to Phoenix’s rescue. The fate of their world depends on it.

Megan Miller: Megan Miller was born in Talara, Peru, and from there grew up in Miami, Barcelona, and the suburbs of London, England. She's also lived in Houston, Austin, NYC, the Hudson Valley, Kentucky, and finally New Mexico. She plays Minecraft daily, and has also spent many hours in the past with arcade game Centipede, the first Castle Wolfenstein shooters, the first color Mac space shooter Crystal Quest, The Sims, Sim City (1-3), City Skylines, Civilization, and more. You can contact her through her website, meganfmiller.com - (see you there!)|||Cara J. Stevens has a deep and abiding love for video games, science fiction and writing. She began her career designing interactive games and stories based on books and is happy to come full circle, creating stories based on video games. She has written nine other books for kids, including the novel Dragon School. When she’s not writing or hanging out at the beach, she can be found playing pinball, WiiU, and classic Atari games. Cara lives in Old Greenwich, Connecticut with her husband, two children, and a loud, fluffy dog named Oliver.