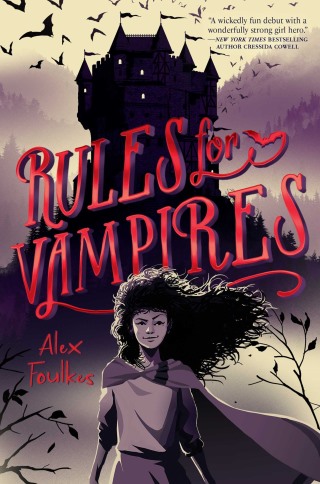 The Nevermoor series meets Hotel Transylvania in this dazzling debut middle grade adventure set in a world of talking spiders, living forests, and haunted castles about a vampire girl who wants to fit in but first must defeat an evil ghost.

After one hundred years of being a vampire, it’s time for Eleonora to have her Birthnight. Since Leo’s last rite of passage, her Grimwalk, ended with her losing her right leg and a good deal of her confidence, she’s hoping to redeem herself in the eyes of her mother, the fearsome Lady Sieglinde. All Leo has to do is hunt down and kill her first prey, and she already has the perfect plan. After all, who will miss an orphan from the bleak St. Frieda’s Home for Unwanted Children?

But an accidental fire causes more death and destruction than Leo bargained for. Instead of killing one carefully selected victim, she’s created several ghosts from the orphanage residents. And one sinister specter, the Orphanmaster, is poised to terrorize the living residents in a nearby town. To stop him and try to undo some of the mess she’s made, Leo must team up with the orphan ghost Minna.

Will Leo have the chance to prove herself as a vampire before her Birthnight is over, or will she discover that there are no winners in the battle of undead versus undead?

Alex Foulkes: Alexandra Foulkes is from Stoke-on-Trent in the Midlands of England, and she’s lived in and around the Staffordshire Moorlands all her life, now with her boyfriend and their dog, Mac, who is just small enough to sit on the back of a broomstick (very convenient!). She works as an inclusion support assistant (a fancy term for TA) at a school where she used to run the library. Alexandra’s passion is amazingly fantabulous books for children. When she’s not reading and reading and reading, she’s writing her very own stories with chills, thrills, and maybe even a talking spider! Visit her online @FoulkesWrites.