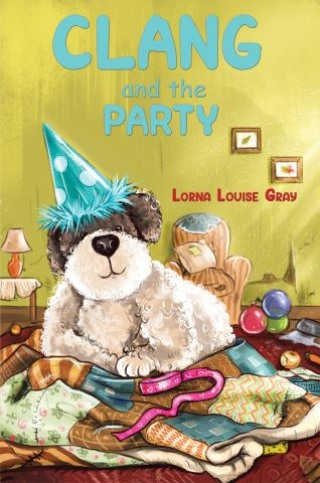 Clang and the Party

It is summer in the sleepy village of Much Moaning. Clang the tufty-pawed dog and his pals, Soot the Greyhound, Twinkle the Great Dane and Bodger the King-size Poodle, are planning a party at Silly Sausage Cottage. It is to be DOGS-ONLY! No humans will be allowed to join in the fun. To have the cottage empty for the party, Clang needs the three humans he lives with to go to Lord Actually's Summer Ball, but there is a HUGE problem! Lady Esme Her Silliness, Lady Lavinia Her Unusualness and Lady Wallopy Thump have no new dresses to wear. Lady Wallopy Thump won’t go to the party in an old dress. Clang twitches his ears, whirrs his tail and thinks up what seems to be a wonderful plan to make the ladies leave the cottage. With Clang planning everything, what could possibly go wrong?! Join Clang and his pals on a hilarious party adventure that you won’t forget!

Lorna Louise Gray: Lorna Louise Gray was an infants’ school teacher in West Sussex for many years, during which time she completed her PhD. As a contrast to academic work and encouraged by her husband Bill, she began writing about the adventures of Clang. In 2011, Bill and Lorna rescued two sighthounds. The antics of Patsy Greyhound and Hamish Lurcher further inspired some of the writing. She lives in Chichester and enjoys walking the dogs in the Sussex woods when she isn’t writing, baking or trying to play the piano!