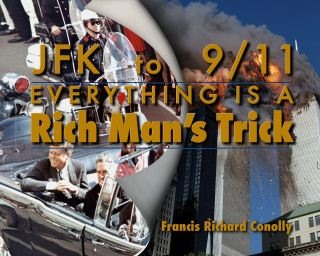 JFK to 911 Everything Is A Rich Man's Trick

JFK to 911 is already a global phenomenon, having began as a Youtube video which achieved over a billion hits by becoming the first documentary in human history to untangle all the establishment lies and reveal the entire truth about the Kennedy Assassination and 911. These disclosures so frightened the powers-that-be that President Trump and the Queen of England took the joint decision to ban it altogether, so that if you read this book, you will be learning the most cardinal secrets which your government would much rather you did not know. Nearly all intelligent people these days are wary of what we are being told by the mainstream media, but fewer are aware that the very notion of 'fake news' began with the words on these pages, and that all government policy in recent times has been an ongoing effort to hold back the increasing enlightenment these words have inspired. Legions of people have taken the trouble to go online so that they could tell the world about how learning that absolutely everything is a rich man's trick—the justice system, the education system, the economic system, and most importantly, the media. Francis Richard Conolly is extremely hopeful that the people who have made a movie which he originally gave them for free such a central part of their existence will now buy this book in order to build the revenues which he needs to make the sequel which everyone wants to see.

Francis Richard Conolly: Francis Richard Conolly was born May 23rd 1957 in Wallsend. He studied Art at College and gained entry to York University. Although many said he would be "the next Dali," his efforts in the Film department attracted even more attention, with University staff members constantly assailing him to produce documentaries about them and their departments, a situation which in turn led to his first professional commission, making a series of Documentaries for the UK health service. But whilst the world seemed ready to accept his talent the BBC, which seemed not to like his grandfather's anti-establishment past, did not. Passed over for every Producer's position he tried instead to write screenplays and found himself plagiarized by Paramount Pictures. It was a disaster which did at least force the BBC to sit up and take notice. This in turn led to his first drama commission, a play for BBC7. Although a hugely-admired and respected Physical Education teacher and pro-athlete, he continued to write screenplays and almost made a breakthrough with Oscar-winning Hollywood Producer David Parfitt, who evinced interest in bringing two of his stories to the big screen. The end result was the cult Youtube movie JFK to 911 Everything Is A Rich Man's Trick, which was given the distinction of being the first documentary ever banned from Youtube in spite of it's achieving way over a billion hits. Francis Richard Conolly was born May 23rd 1957 in Wallsend - so named because it denotes the exact spot wherethe Roman Emperor Hadrian finished his wall, which stretches right across England about fifty miles from the border with Scotland. One of his grandparents organized the famous Jarrow March. His parents were Emmanuel John Conolly, a Shipyard Tradesman, and Anastasia Rose Fortune, a Nurse and Irish immigrant. Although singled out and praised from the very beginning of his school years as a gifted Artist ( being able to draw better than his teachers aged 5 ) he was equally singled out b