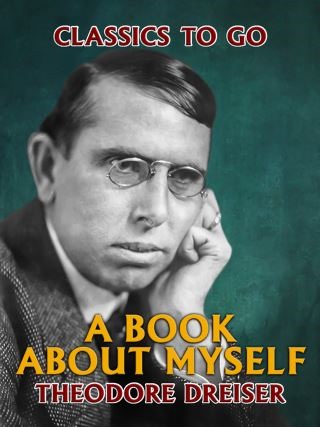 A Book About Myself

Excerpt: "During the year 1890 I had been formulating my first dim notion as to what it was I wanted to do in life. For two years and more I had been reading Eugene Field’s “Sharps and Flats,” a column he wrote daily for the Chicago Daily News, and through this, the various phases of life which he suggested in a humorous though at times romantic way, I was beginning to suspect, vaguely at first, that I wanted to write, possibly something like that. Nothing else that I had so far read—novels, plays, poems, histories—gave me quite the same feeling for constructive thought as did the matter of his daily notes, poems, and aphorisms, which were of Chicago principally, whereas nearly all others dealt with foreign scenes and people. But this comment on local life here and now, these trenchant bits on local street scenes, institutions, characters, functions, all moved me as nothing hitherto had. To me Chicago at this time seethed with a peculiarly human or realistic atmosphere. It is given to some cities, as to some lands, to suggest romance, and to me Chicago did that hourly. It sang, I thought, and in spite of what I deemed my various troubles—small enough as I now see them—I was singing with it. These seemingly drear neighborhoods through which I walked each day, doing collecting for an easy-payment furniture company, these ponderous regions of large homes where new-wealthy packers and manufacturers dwelt, these curiously foreign neighborhoods of almost all nationalities; and, lastly, that great downtown area, surrounded on two sides by the river, on the east by the lake, and on the south by railroad yards and stations, the whole set with these new tall buildings, the wonder of the western world, fascinated me. Chicago was so young, so blithe, so new, I thought. Florence in its best days must have been something like this to young Florentines, or Venice to the young Venetians."

Theodore Dreiser: Theodore Herman Albert Dreiser (August 27, 1871 – December 28, 1945) was an American novelist and journalist of the naturalist school. His novels often featured main characters who succeeded at their objectives despite a lack of a firm moral code, and literary situations that more closely resemble studies of nature than tales of choice and agency.