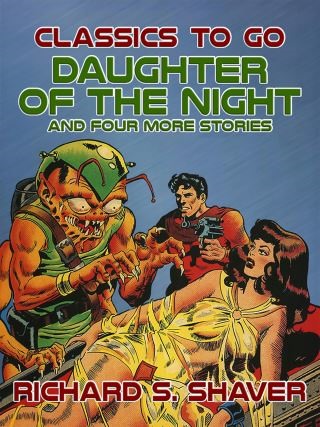 Daughter of the Night and Four More Stories

Five Classic Short Stories from The Golden Age of Science Fiction. Featured here: "Daughter of the Night", "The Dark Goddess", "Of Stegner's Folly", "The Big Tomorrow", and "Paradise Planet", all by Richard S. Shaver.

Richard S. Shaver: Richard Sharpe Shaver (October 8, 1907 Berwick, Pennsylvania – November 5, 1975 Summit, Arkansas) was an American writer and artist. He achieved notoriety in the years following World War II as the author of controversial stories that were printed in science fiction magazines (primarily Amazing Stories), in which he claimed that he had had personal experience of a sinister ancient civilization that harbored fantastic technology in caverns under the earth. The controversy stemmed from the claim by Shaver, and his editor and publisher Ray Palmer, that Shaver's writings, while presented in the guise of fiction, were fundamentally true. Shaver's stories were promoted by Ray Palmer as "The Shaver Mystery".