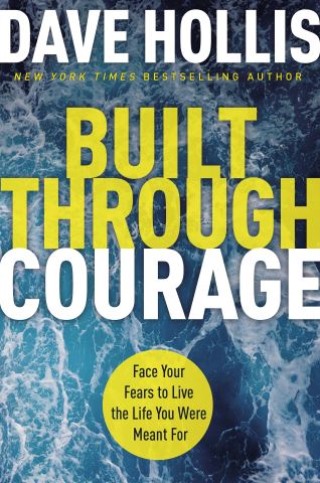 Face Your Fears to Live the Life You Were Meant For

New York Times bestselling author Dave Hollis knows what it feels like to realize you’ve been sailing off of someone else’s map. He has taken control of his life and future, and he’s ready to share the lessons he learned along the way with readers who are facing similar struggles.

Dave Hollis was recently confronted with the fact that he was living the life someone else wanted for him. After weathering a highly publicized personal crisis amid the backdrop of an international pandemic and navigating the enjoyable but unpredictable waters of being a single father to four kids, he has been forced to become the captain of his own life and is ready to teach others how to do the same.

Built for Courage will help you:

Built for Courage gleans wisdom from sources vast and wide, as well as from the life experiences of Dave himself, to get you to the place you’re meant to go and become who you are meant to be, regardless of any anchor holding you back.

Dave Hollis, New York Times bestselling author of Get Out of Your Own Way, host of the Rise Together podcast, health & fitness enthusiast and online coach works to inspire others to take control of their lives and create a future of fulfillment and purpose. Dave’s history includes CEO of a media start-up, former president of sales & distribution for the film studio at The Walt Disney Company, a talent manager across film, tv & music and work in the publicity, research, and technology fields across the entertainment sector. In those roles, Dave has seen both the negative consequences of limiting beliefs and the positive power of imagination, dreams, and believing in oneself.

Dave has sat on the board of the membership committee for the Academy of Motion Pictures, Arts and Sciences of which he is a member, and on the boards of Fandango Labs, Will Rogers Motion Picture Pioneers, National Angels and his alma mater Pepperdine’s Institute for Entertainment Media and Culture. Dave’s philanthropy exists via the Dave Hollis Giving Fund where acting as an ally to the needs of children in foster care, teen homelessness and food insecurity have been a recent focus for grants. A father of four and former foster parent to four more, Dave and his family live in Austin, Texas, where he drives a 1969 Ford Bronco named Incredible Hulk and has a mini schnauzer named Jeffrey.