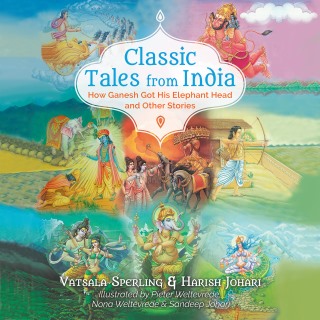 How Ganesh Got His Elephant Head and Other Stories

• Shares stories drawn from the Mahabharata, the Ramayana, and the Puranas, translated by the authors

• Brings the colorful characters of Hindu mytholofy to life--humans, gods, and demons alike

With this collection of classic tales from India, you will learn about the playful, loyal, strong, loving, and wise gods, goddesses, and heroes of India. You will discover how the deity Ganesh, the remover of obstacles, got his elephant head, how the goddess Parvati won the heart of the great god Shiva, and how the goddess Ganga came to Earth from Heaven in the form of the holy Ganges River. You will discover how Krishna’s childhood as superhero and mischievous boy prepared him to fulfill his destiny as an avatar of the god Vishnu. In two tales drawn from the Ramayana, you will learn about prince Ram and his victory over the ten-headed demon king Ravana and how the monkey-god Hanuman moved a medicine mountain to save Ram’s brother. In two stories from the famous epic the Mahabharata, you will discover how Karna became the greatest archer in the world to help good triumph over evil and how Arjuna compassionately fought his own cousins to bring peace to the kingdom of Hastinapur.

Full of rich detail, these stories bring to life the colorful cast of characters--humans, gods, and demons alike--and allow the reader to become immersed in the mystical world of ancient India.

Vatsala Sperling: Vatsala Sperling, Ph.D., fluent in a number of Indian languages and Sanskrit, learned these traditional stories at her mother’s feet and enjoys introducing them to children of the Western world. Before marrying and moving to the United States, she was the chief of Clinical Microbiological Services at the largest children’s hospital in India. The author of Classic Tales from India, she lives in Vermont with her husband and son.|||Harish Johari (1934-1999) was a distinguished North Indian author, Tantric scholar, poet, musician, composer, artist, and gemologist who held degrees in philosophy and literature and made it his life's work to introduce the culture of his homeland to the West.
Here is a hot link to a web site dedicated to Harish Johari's work that was set up by his students. http://www.sanatansociety.com/artists_authors/aa_harish_johari.htm