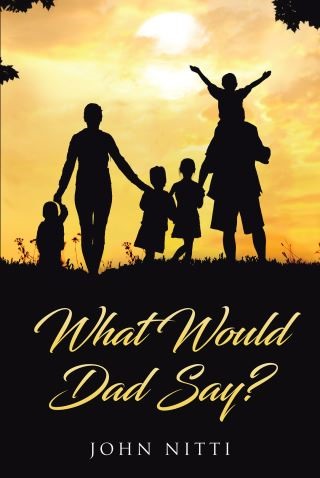 What Would Dad Say?

What Would Dad Say? provides motivation and advice supported by stories relating to family, friendship, love, marriage, athletics, education, health, fitness, career planning, money, religion and death. Rules of life were developed by author, John Nitti, based on years of experience in a multitude of settings from growing up in a diverse town on Long Island to Yale University. His background also includes time in the NFL and on Wall Street. He utilized his knowledge and experience to raise four successful children with his wife, Pat, and is now sharing that in this book.

Lessons learned from college professors to high-powered business executives, from well-known sports figures and team owners to entertainers, from ancient Greek philosophers to political leaders and from the very rich to the homeless are all shared. Evidence relating to everything from formulas for success to avoiding the pitfalls associated with regrettable failures provide helpful, practical examples. Life experiences and crossroads are shared in order to help others optimize their success and happiness.

The original target audience was solely John’s four children; he wanted them to understand his outlook on life and some keys to success and happiness just in case anything happened to him. His thoughts of mortality were reinforced after the death of a friend and then crystalized when his brother-in-law, firefighter Brian McAleese, died in the World Trade Center during the terrorist attacks on September 11, 2001. As Father Mychal Judge (the New York City Firefighters’ chaplain who died when the World Trade Center collapsed) said right before the attack, “If you want to make God laugh, tell him what you’re going to do tomorrow.”

While many of the rules are based on proven experiences, scientific evidence or specific facts are not provided in detail. There is plenty of research material that can always be referenced. There are also many books that are dedicated entirely to almost every subject that is addressed in only a single rule within these pages. But, What Would Day Say? is purposely simple and broad in order to cover a wide range of subjects and be memorable. It captures thoughts in the same way that one would be forced to answer on the spur of the moment, delivered in a casual conversational style.

One may lead a good life by following these simple rules. Some of the rules are obvious, but we all need to be reminded. Others are more intuitive. Still others would perhaps cause quite a debate regarding their validity. But they have worked. And just as children listen to some guidance and disregard the rest, so will anyone who reads this book adhere only to some of these rules and forget the others. For in the end, it’s their choice and their life. We can’t tell people what to do, but we can help them learn from experience and foresee the consequences of their actions. It is hoped What Would Dad Say? will provide that for you.