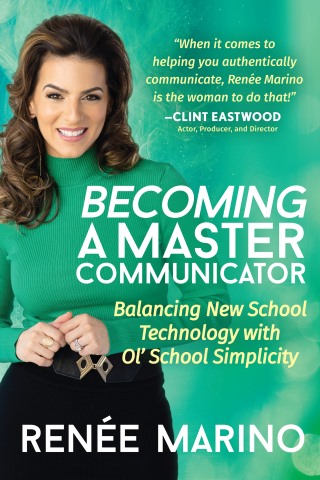 Renée Marino is a professional communication coach named by Yahoo Finance as one of the “Top 10 Communication Coaches to Follow in 2021!” She was the co-host of Tony Robbins and Dean Graziosi’s first-ever virtual “World Summit” and has spoken, performed, and been interviewed on thousands of live and virtual stages, including Dean Graziosi’s podcast The Dean Graziosi Show. Renée helps people create genuine connections in their life and business by balancing new school technology with ol’ school simplicity. She also uses her well-rounded experience of communicating through various mediums to train companies, organizations, schools, and universities in strengthening their communication skills. Renée can be seen as the female lead, Mary Delgado, in the film Jersey Boys, directed by Clint Eastwood. She has been featured in People.com’s “Ones to Watch,” Variety, and The Huffington Post, which stated: “The Broadway star—who is basically Tina Fey’s celebrity doppelganger— is a scene-stealer, spouting swears and put-downs with aplomb. ‘Jersey Boys’ pops whenever she’s onscreen.” Renée wrote and performed her solo show, I Am Me, Because of Three, to sold-out venues in NYC and LA and received rave reviews. Her Broadway credits include Pretty Woman: The Musical (dance captain/assistant to the choreographer/ensemble), West Side Story (Rosalia), Jersey Boys (Mary Delgado), Chaplin, and Wonderland (ensemble). She has toured North America with Cats, Disney’s High School Musical, and Jersey Boys. Her television credits include Regina on Fox’s Weird Loners and The Marvelous Mrs. Maisel. As a coach, keynote speaker, and longtime performer, Renée Marino has inspired people worldwide with her energy, relatability, and authentic spirit.