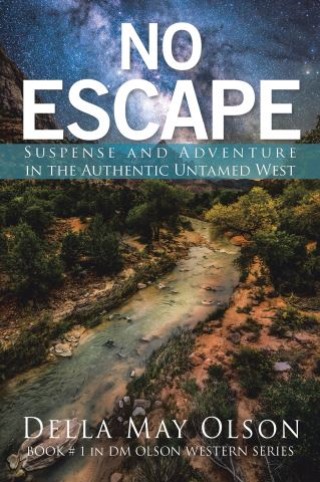 Suspense and Adventure in the Authentic Untamed West

NO ESCAPE is both a tragedy and a story of courage and redemption. Mistakes made must suffer consequences. Mattie summed it up when talking to Jed, her former employee and now captain of the handcart company with whom she and her twins are hiding to escape the vengeance of her former escaped from prison husband, Benjamin Farkle. “Jed, I have done so many things wrong in my life. Do you think I can ever be forgiven? Do you think God ever thinks twice about me?” Mattie finds answers to her question as she and Jack Sisson leave the handcart company to search for Dolly, her eight-year-old twin daughter, lost in a horrific hailstorm, and presumed dead, while along the Sweetwater River in Wyoming. Ten years later Farkle, who has embraced the dark side, finds Mattie in Weaver, Wyoming. After a tragic confrontation with the evil Farkle, Butch Weaver, moans to Jack Sisson, “Can anything be worse?” After Jack’s answer Butch continues. “Hatch is dead. Your house burned to the ground. Half the family is ailing. I can’t be very cheerful.” “Houses can be rebuilt. People mend. We can’t help Hatch, but we will never forget him, either. It’s time to lick our wounds and heal.” “Words are easy, Jack.” Interspersed with humor, church history, and romance, the excitement Never ends. OTHER BOOKS BY DELLA MAY OLSON LENA’S RAINBOW TERROR ON LOCO RIDGE GROWING UP BRONSON CRAB APPLE PIE NO ESCAPE THE TANGLED ROSE TANGLE CREEK DRIVEN www.dellamayolson.com

Della May Alson: Della May Olson grew up on a ranch in Montana schooled in the ‘code of the West’. From a two-room schoolhouse in Sun River, Montana, to graduating from Mesa Community College, in Mesa, Arizona , at the age of thirty-nine, as class Valedictorian, she never lost her love of horses, sports, poetry, drama, and writing. Her poetry, especially Christmas themed, has won her many awards. The main award being the love of family and friends as they perform her works. She has lived in Cottonwood, Arizona for the past forty-seven years. Married to her husband Merle for sixty-two years, they have four children, all living in Cottonwood, fifteen grandchildren, and forty-two great grandchildren. Humor and action are hallmarks of her stories and poetry. She believes in faith, hard work and miracles.