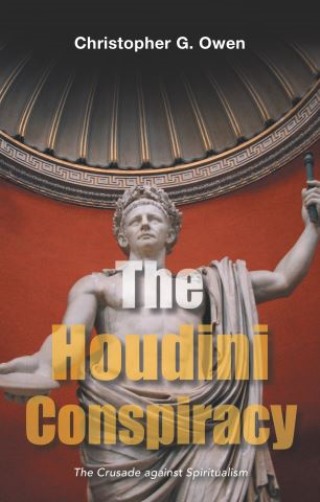 The Crusade Against Spiritualism

It is the 1920s and Catholic leaders do not want another wave of spiritualism in America, especially after barely containing the last one. Now as a new organization emerges armed with their own bible, they fear they are about to witness a highly organized attack on the religious hegemony in the New World. One of the leaders of this organization is Cora Richmond, a deep trance medium who has just authored a troubling book.

Erik Weisz, otherwise known as the Great Houdini, is a world-class showman and flamboyant self-promoter who is in the waning days of his career when he receives the commission of a lifetime from his handlers: to lead a worldwide crusade to destroy the spiritualist movement in America so it will never recover to its former level. As established religions of the world, based on a flimsy patchwork of myth and stolen history, find their champion in Houdini, now only time will tell if he can singlehandedly sabotage humanity’s age-old quest for spirituality and create a heroic legacy that will endure for generations to come.

In this fascinating tale, the Great Houdini is commissioned to lead a global crusade to destroy a modern spiritualist movement in America.

Christopher G. Owen earned a bachelor’s degree in history. He served as a Sergeant in the 187th Infantry Brigade United States Army Reserves. Christopher currently resides in Maine. Creation of the Southern Nation was his debut novel, which was an alternative history that introduces the first wave of American Spiritualism. His second book, The Houdini Conspiracy, explains the second wave of Spiritualism and why it was short circuited by shadowy powers that have always controlled Western Society back to ancient times.