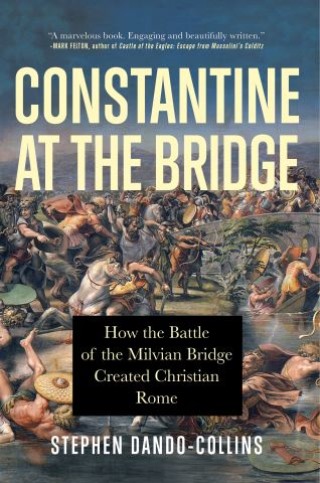 Constantine at the Bridge

The publication of Constantine at the Bridge marks 45 books from award-winning author Stephen Dando-Collins. His books are available around the world in numerous languages. Dando-Collins is considered an authority on the legions of ancient Rome. His 2013 book, Rise of an Empire, was made into the major motion picture 300: Rise of an Empire.

Dando-Collins is acclaimed for his precise attention to historical detail while maintaining engaging narratives. This book is sure to appeal to his existing history fan base, academics, and religious leaders. It is the only account of the Battle of Milvian Bridge that unites academic merit with page-turning general market appeal.

Dando-Collins' examination of the Battle of Milvian Bridge reveals the mechanisms that allowed Christianity to spread and become a major world religion, giving the book headline-appeal to the media.

Stephen Dando-Collins: Stephen Dando-Collins is the award-winning author of nearly 50 books, including children's novels and biographies. The majority of his works deal with military history ranging from Greek and Roman times to American 19th-century history and World War I and World War II. Many of his books have been translated into foreign languages including Spanish, Italian, Portuguese, Dutch, Polish, Russian, Albanian, and Korean. Dando-Collins is considered an authority on the legions of ancient Rome; his decades of research culminated in his 2012 work, Legions of Rome. With all of his books, Dando-Collins aims to travel roads that others have not, unearthing new facts and opening new perspectives on often forgotten or overlooked people and aspects of history. He resides in Tasmania, Australia.