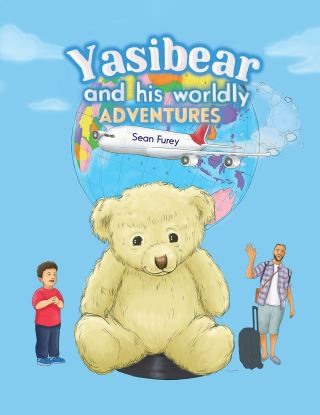 Yasibear and His Worldly Adventures

Teddy bears don’t experience life, do they?
Desperately wanting that teddy bear from a toyshop, Yasin begs his grandmother to buy it for him. There is something special about that one.
The day before his Uncle Sean goes travelling, Yasin gives the bear to him as a gift and decides to name him Yasibear! And this is where the story begins…
Can teddy bears experience life? Yasibear can!

Sean Furey: Born and raised in London, England, Sean is a marketing professional who has always had a love for writing, be it short stories or poems. Sean left his job in 2015 to pursue his second love – travelling. Sean travelled around the world, starting in London then flying east and finishing in New York. Upon returning from a six-month adventure, Sean was inspired to turn his experience into a story but with an imaginative twist. He decided to write a children’s book based on the toy teddy bear given to him by his nephew that accompanied him throughout his journey. Sean’s upbringing was full of happiness and that feeling is something he wants to convey to the children who read or hear his work.