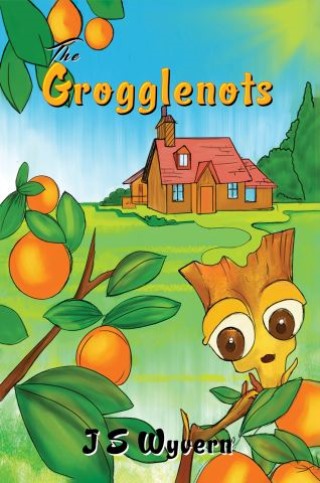 The year is 2019 and over in the orchard the mystical creatures called the Grogglenots are hard at work. Their main job is to Sprocklegog any fruit back to the trees if it is about to fall before being ripe. They do this using a special Sprocklegog gun and they work very hard in all kinds of weather conditions to keep the fruit safe for humans to eat.
Unbenknownst to them, underneath the orchard their arch nemesis the Giggees are planning to declare war on the Grogglenots and take the orchard for themselves. War eventually does happen and a fierce battle ensues. Giant centipedes and fire breathing snails are amongst the weapons used by either side. The Grogglenots have help in the form of an alchemist called Ethan and the Ivy Dwellers who live at the Manor House. The Giggees also have an alchemist on their side who helps them with their weaponry. Lives are lost on both sides, but who will win the war? Will good overcome evil? And what will be the future for the Grogglenots and their beloved orchard home?

J S Wyvern: J S Wyvern is a husband and wife writing team, both born and raised in the East Midlands, UK. They are huge fans of fantasy and enjoy writing both children and adult books in this genre. They are also animal lovers and have adopted and fostered a lot of animals in their time together. This is their first traditionally published book, which they are very proud of. Having written for a number of years they are excited to see their work in print and in mainstream bookshops which has always been their dream.