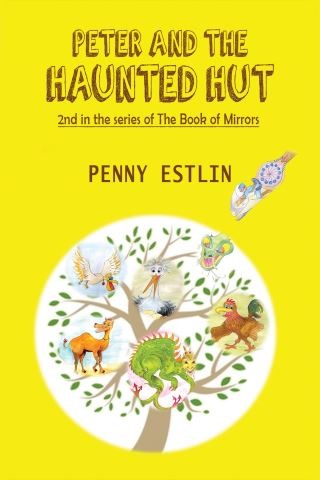 Peter and the Haunted Hut

2nd in the series of The Book of Mirrors

Five children. Jeremy, Lydia and Sam look after their two little ones, quiet Jubilee and her outspoken brother, Joel. One evening as they fall asleep, they drift into a dream of things that happened over two thousand years ago, where a rough fisherman called Peter met Jaycee, a man who heals sick people – by magic?   Jeremy still has his magic sac of everlasting water. Sam’s stick from a cedar tree becomes a magic sword and is back in his belt. Lydia checks her pocket; her mirror of knowledge is still there, and the little ones carry two amazing gifts – a stone and the Book of Life. Many strange creatures help them on their journey of discovery. Giant locusts fly them through time; Amos, a proud Pelican bird, is the wing commander of many bird divisions – on watch! Florrie, a nervous stork; Red, the clumsy navigator cockerel – who crows three times and flies them into a maze of planet worlds. Two young first-year student angels are sent to take care of them – to pass their exams! The children witness the shape-shifting of Jaycee on a high mountain, where a mysterious hut leads to many rooms of life after death, but are the swirling grey ghostly dervishes waiting?   High above them are the Zephier Comet bikers – shooting star angels – who come to save them in a great heavenly battle between Jaycee and the evil dragon prince of Persia who needs to stop Peter from being a great leader.

Penny Estlin: Penny Estlin was born in Long Eaton, Derbyshire, but went with her family to South Africa at an early age to live by a lagoon called Green Shadows near Durban. Here she lived with her older brother and younger sister, in a magical world of golden beaches covered in tiny red crabs playing at dawn, goggle eyed chameleons hanging from the leaves of mango trees where lazy chocolate coloured dung beetles plodded along in the shadows beneath. She returned with her family to England in the early 1950s. Adulthood shook her out of this innocence and, during the next 60 years, Penny nursed at a Group Captain Cheshire home; joined the WRAF and became a PT Instructor; dabbled in the world of fashion design and production; developed and ran a large rest home; built a Victorian style restaurant in a cellar, in which she was the chef; moved to the Costa del Sol, Spain where she designed houses and apartment blocks, believed to be the first women to start a property development company in this area. In the late 80s she returned to England and wrote articles for several prestigious magazines, mostly on sailing, before moving to Lower Normandy in France. More recently, Penny has retired, with her husband, to live near Alicante on the Costa Blanca where she has benn licensed as a lay minister in the Anglican Episcopal Church Spai. On 10 June 2007, Penny was called to write children’s adventure books to encourage and inspire hope rather than fear. Her works are based on biblical and historical facts.