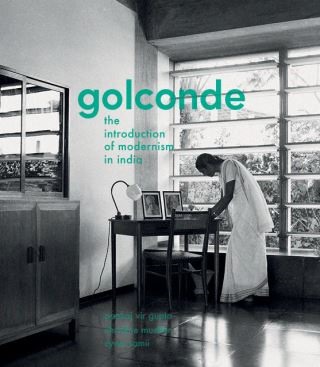 The Introduction of Modernism in India

Golconde is an astonishing architectural accomplishment. With technical finesse and extraordinary craft, it offers a living testament to the original modernist credo - architecture as the manifest union of technology, aesthetics, and social reform. Here exists an undiluted view of a wholly triumphant tropical Modernism, built during the tumultuous years of the second world war.

If ever there was a time when the notion of sanctuary, of a place in the world at a safe remove from its tribulations needed to be manifest, then this certainly is that year. Enforced isolations, mediated encounters, and filtered interfaces have become the norm. An unseen adversary has unmasked our frailty, weaponizing our own breath, making an enemy even of that essential human construct – shared space. The seeking of spatial solace has been a human preoccupation for much of our existence. Golconde is one such exemplar of calm. Created during another tumultuous time of human suffering – at the onset of the second World War - this building continues to offer succor to its residents, even from this latest upheaval.

Pankaj Vir Gupta: Pankaj Vir Gupta and Christine Mueller are founding partners of vir.mueller architects, an award winning architecture firm in New Delhi (www.virmueller.com). Cyrus Samii is an urban planner, and led the Department of Urban Planning for the City of Santa Fe. During the summer of 2003, the authors conducted primary source research on Golconde. Living and working within the environment of the Sri Aurobindo Ashram enabled a rare glimpse of the rhythm and cadence of life within the halls, rooms and gardens of Golconde. Based on their research and time in the Ashram, they authored Golconde: The Introduction of Modernism in India, the first complete monograph published on the building.

Pankaj Vir Gupta is a Professor of Architecture at the University of Virginia (UVA), where he is the Co-Founder and Co-Director of the Yamuna River Project, a major pan-university research project. Since 2012, he has been teaching Urban and Architecture Design studios at the UVA School of Architecture and leading a multi-disciplinary research initiative focused on the revitalization of urban precincts adjacent to the Yamuna river in New Delhi, creating a vital ecological center for India’s capital city.

Most recently, he has co-authored (with Inaki Alday) Yamuna River Project: New Delhi Urban Ecology (2018 Actar Press, New York & Barcelona). This book encapsulates the evidence-based research and analysis of the crisis afflicting the urban ecology of the Yamuna River in New Delhi, and proposes design proposals for ecological and urban remediation. The book was recognized and awarded as one of the top ten architecture books of the year by the German Architecture Museum in 2018 (DAM).||||||