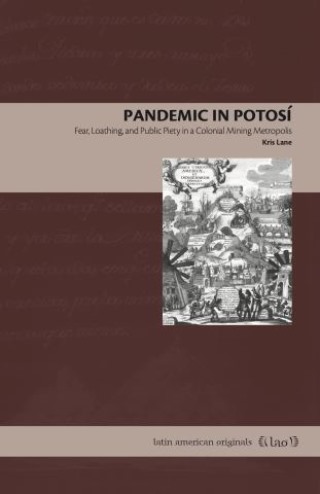 Fear, Loathing, and Public Piety in a Colonial Mining Metropolis

In 1719, a deadly and highly contagious disease took hold of the Imperial Villa of Potosí, a silver mining metropolis in what is now Bolivia. Within a year, the pathogen had killed some 22,000 people, just over a third of the city’s residents. Victims collapsed with fever, body aches, and effusions of blood from the nose and mouth. Most died within days. The great Andean pandemic of 1717–22 was likely the most destructive disease to strike South America since the days of the Spanish conquest.

Pandemic in Potosí features the single longest narrative of this nearly forgotten period, penned by local historian Bartolomé Arzáns de Orsúa y Vela, along with shorter treatments of the disease’s ravages in Cuzco, Arequipa, and the outskirts of Lima. The “Gran Peste,” as it was called, was a pivotal event about which Arzáns wrote at length because he lived through it, but also because it was believed to have cosmic significance. Kris Lane translates and contextualizes Arzáns’s account, which is rich in local detail that sheds light on a range of topics—from therapeutics, devotional life, class relations, gender, and race to conceptions of illness, sin, and human will and responsibility during a major public health crisis.

Original narratives of the pandemic, translated here for the first time, help readers see commonalities and differences between past and present disease encounters. Designed for use in courses on Latin American history, this concise work will also interest scholars and students of the history of religion, history of medicine, urban studies, and epidemiology.

Kris Lane: Kris Lane is France V. Scholes Professor of History at Tulane University. He is the author of several books, including Potosí: The Silver City that Changed the World; Pillaging the Empire: Global Piracy on the High Seas, 1500–1750; Colour of Paradise: The Emerald in the Age of Gunpowder Empires; and Quito 1599: City and Colony in Transition.