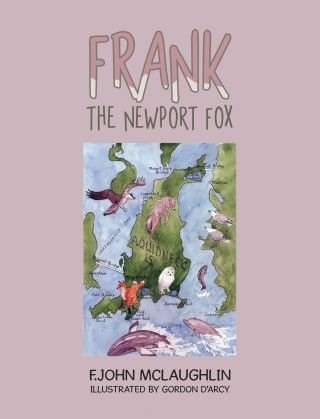 Frank the Newport Fox relates the tale of a family on Aquidneck Island facing disaster. Homeless after losing 2 dens in twenty-four hours, they are suddenly vulnerable to marauding packs of vicious coyotes invading the island. The fast moving story tells how Frank and his glamorous vixen, Terry solve one crisis after another. Coyote and skunk evictions, fly fishing, wild turkey hunting, ghosts and the Newport Bermuda race will keep young reader enthralled.

F.John McLaughlin: Dr. F. John McLauglin was raised in England, went to school in Ireland, and was very tired when he got home. After obtaining a medical degree from Trinity College, Dublin, he set out to explore the New World 400 years after Columbus. He settled in New England, teaches at Harvard, and practices pediatrics in Fitchburg, Massachusetts. He has written four young adult books and is working on a fifth (book). “Hamish the Haggis”, is the story of the 3-legged haggis from the Highlands of Scotland. The story touches on golf, whisky, deception, Robert Burns, bagpipes, and the escape of the haggis to North America. “Eoin the Irish Bald Eagle” is the story of a juvenile bald eagle, found exhausted in a field in County Kerry, Ireland. What was a bald eagle doing in Ireland? This book relates the eagle’s tale of how he crossed the Atlantic Ocean, and his adventures in Ireland. “Great Auk Tales” is for young and old. In it, he brings the extinct great auks back from the grave, and relates their exciting adventures as they find a new home. “The Gollymocky Whale” follows the adventures of a group of boys in an Irish boarding school as they set out to free a landlocked humback whale. All four books are masterfully illustrated by the artist Gordon D’Arcy, Ireland’s leading nature artist.