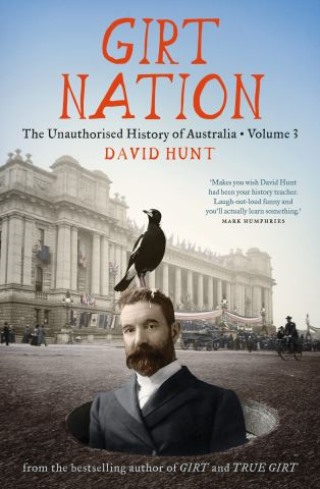 The Unauthorised History of Australia Volume 3

The saga of Australia continues with ... GIRT NATION

David Hunt tramples the tall poppies of the past in charting Australia’s transformation from aspiration to nation –an epic tale of charlatans and costermongers, of bush bards and bushier beards, of workers and women who weren’t going to take it anymore.

Girt Nation introduces Alfred Deakin, the Liberal necromancer whose dead advisors made Australia a better place to live, and Banjo Paterson, the jihadist who called on God and the Prophet to drive the Australian infidels from the Sudan ‘like sand before the gale’. And meet Catherine Helen Spence, the feminist polymath who envisaged a utopian future of free contraceptives, easy divorce and immigration restrictions to prevent the ‘Chinese coming to destroy all we have struggled for!’

Thrill as Jandamarra leads the Bunuba against Western Australia, and Valentine Keating leads the Crutchy Push, an all-amputee street gang, against the conventionally limbed. Gasp as Essendon Football Club trainer Carl von Ledebur injects his charges with crushed dog and goat testicles. Weep as Scott Morrison’s communist great-great-aunt Mary Gilmore holds a hose in New Australia. And marvel at how Labor, a political party that spent a quarter of a century infighting over how to spell its own name, ever rose to power.

David Hunt is an unusually tall and handsome man who likes writing his own biographical notes. He is the author of the bestselling Girt and True Girt, as well as two books for children. David is also a television presenter and podcaster, and has a birthmark that looks like Tasmania, only smaller and not as far south.

‘An entertaining and instructive historical romp through the formative period of Australian nation-making with a colourful cast of rhymesters, revolutionaries, rebels, racists, reprobates and rabbits.’ —Frank Bongiorno, Professor of History, The Australian National University

‘Insightful, witty and beautifully written, Hunt’s latest offering is as Ozzie as a mozzie in a cozzie.’ —Mikey Robins

‘An instant classic – Hunt's finest work to date. His clever use of language and insightful analogies connect Australia's past with its present, showing how our history echoes today.’ —Charles Firth

‘A hilarious and witty telling of our nation’s birth – girt by criminals, blaggards, snobs, wowsers and, most importantly, feminists!’ —Wendy Harmer

‘I was hooked by the second sentence, and kept asking myself, “How can this be so horrific, so hilarious, so ridiculous, and most shocking of all, so true?” But this is not a mere history lesson: as Hunt deftly brings to life Australia’s past in a way that both illuminates and makes the reader cringe, he also makes us face our nation’s present, and future.’ —Susan Carland

‘Makes you wish David Hunt had been your history teacher. Laugh-out-loud funny and you’ll actually learn something.’ —Mark Humphries

‘Once again, David Hunt uses his sharpened wit to chisel away at misconceptions from Australian history leaving us with the cold, hard truth of how our nation came to be.’ —Osher Günsberg

David Hunt: David Hunt is an unusually tall and handsome man who likes writing his own biographical notes. He is the author of the bestselling Girt and True Girt, as well as two books for children. David is also a television presenter and podcaster, and has a birthmark that looks like Tasmania, only smaller and not as far south.